Once Upon a Time Season 1 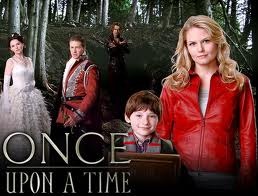 SUMMARY (from IMDB): Emma Swan gets the surprise of her life when Henry, the son she gave up 10 years ago, arrives on her doorstep. Returning the boy to his adoptive mother becomes complicated when Henry reveals a stunning theory to Emma. Everyone in Storybrooke, Maine is a fairy-tale character under a curse, and Emma – as the long lost daughter of Snow White and Prince Charming – is the one who can save them all. The story unfolds; interweaving scenes of the drama in the sleepy New England town and the inhabitants' past lives in the world of fairy tales. The timeless battle of good vs. evil is ready to begin again.

Prior to starting watching it I was intrigued, but at the same time I thought it might be a little boring. After all, I had been familiar with a lot of fairy-tales already. I could not have been more wrong.

While Once Upon a Time is fairly loyal to the traditional fairy-tales, the way it combines them makes everything look fresh. It is like when you are eating a cake and a memory of that delicious cake your mom made when you were a child echoes in your memory. Thus, Once Upon a Time evokes a childhood nostalgia, and at the same time numerous edgy little twists keep things interesting.

The most notable characters are Emma, Henry, and Regina. Regina is a gloriously malicious evil queen I love to hate and hate to love. She is very powerful and her strikes are brutal. However, learning the reasons why she has become the way she is and why she is doing all those bad things, I cannot help but spare her a pinch of compassion.

I like the contrast between Regina and Emma, which does not exist only in terms of good vs. evil. Regina is all about use and abuse of power, strongly immersed into the world of magic she came from. Emma, on the other hand, is a very grounded person, trusting only physical evidence, and a position of power does not corrupt her. In that aspect, Henry is not only caught between them as an adopted/biological child, but also as someone who is able to reconcile the reality of this world with the the belief in the fairy-tale land and its magic.

Mr. Gold/Rumpelstiltskin is also a very intriguing character, always hiding an ace up his sleeve, so you never know what he is up to. He is basically no better than Regina, but as well as her backstory his makes me feel some sympathy towards him. Actually, I quite like him.

Another character I liked was Sheriff Graham, and I was disappointed when he was killed off.

Although Snow and Charming are central characters, I have mixed feelings about them. In the beginning, I loved them a lot and was rooting for their story to end happily. But then everything stared to drag too much, and they did some things I do not approve of, so I became more or less indifferent towards them.

Basically each and every character in Once Upon a Time has an interesting backstory and traits worth analysing, but it would take too long, so if you want to know more, you will just have to watch the show.

The finale wrapped up the season's story arc quite well, but it left enough open space to make me want to know what happens next.

Here are my predictions and questions for season two:

Overall, I enjoyed this series. It was predictable to an extent and sometimes annoying (mainly Regina – but it would be something wrong with me if I were not disturbed by her actions), but not enough to put me off watching it. I am definitely looking forward to season two.

RECOMMENDATION: Once Upon a Time offers an intriguing take on numerous classic fairy-tales. If you are a fantasy type, you will like it. However, I would not recommend it to younger audience due to violent scenes which are at times quite graphic.