One of the most important reasons I loved Gilmore Girls was that I could relate to Rory's love for reading. The other day I came across a list of books mentioned in the show. I am not challenging myself to read all of them, but I thought it might be fun sharing which books I have read and which ones I am planning to.

What about you? Have you read any of these? Are you planning to? 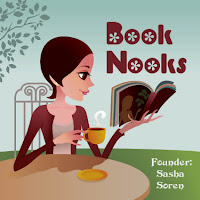 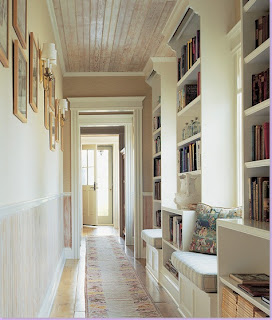 Commentary: A great solution for a hallway in a big house, especially one with windows like this one. I can imagine a nice little garden outside. There is plenty of light, and the window seats look comfortable. I could certainly spend some time reading in such a place. 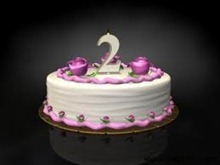 I can't believe I've been blogging for two years! Woo-hoo!

As much as this deserves a big celebration, my budget doesn't allow me to treat you with a giveaway, but hey, there's always hope to next year (or sooner).

But, at least we can afford a happy song to bring on some cheer:

Thanks so much to all my followers and fellow book bloggers for making blogging such a wonderful experience! And thank you for all your kind words, and help and support! Again, basically all the book blogging community just being there makes me feel better sometimes.

Here's to all of you and more good (at least I'll aim for good) blog posts! 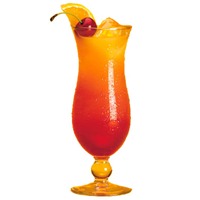 (from Goodreads): Hell on earth. That's what it's like for Luce to be apart from her fallen angel boyfriend, Daniel. It took them an eternity to find one another, but now he has told her he must go away. Just long enough to hunt down the Outcasts - immortals who want to kill Luce. Daniel hides Luce at Shoreline, a school on the rocky California coast with unusually gifted students: Nephilim, the offspring of fallen angels and humans.

At Shoreline, Luce learns what the Shadows are, and how she can use them as windows to her previous lives. Yet the more Luce learns, the more she suspects that Daniel hasn't told her everything. He's hiding something - something dangerous.

What if Daniel's version of the past isn't actually true? What if Luce is really meant to be with someone else?

I absolutely loved Fallen. I read it last year, so it took me awhile to get into Torment because I had trouble remembering some details from Fallen. However, after the first fifty pages or so, the book pulled me in, and I could not put it down because I needed to know what happened next.

Although Torment is an absorbing book, I did not enjoy it as much as Fallen. I had expected to learn some things hinted at in Fallen, but Torment opens more questions than it answers. Kate remains very vague about both Luce's and Daniel's story on a minor scale and the fight between various fractions of angels on the major scale.

I was annoyed by all the non-communication and teenage angst, especially when Luce is concerned. I loved her character in Fallen, but this time Luce really got on my nerves because of various reasons. Firstly, she acts stupidly and irresponsibly and does not do what other people tell her to do. I am all for breaking the rules, but not in the way Luce does. Considering she now knows a little bit about the dangerous world out there, she should think things over, learn, and try to obtain information about the things she hears about. Instead she acts like a reckless, stubborn child.

Another thing that bothers me with Luce is that she is still set to seeing the world in black and white. She shows a kind of narrow-mindedness there, not allowing for the possibility of grey areas, and again not educating herself about things, but just sticking to her simply defined views of good and evil.

Speaking of good and evil, Torment does not clarify the issues opened in Fallen. The history of fallen angels and their disputes, as well as their future prospects, are again only mentioned, but not examined further. Hence, I felt let down by Torment.

Despite the fact that Torment falls short in comparison to Fallen, I will definitely continue reading the series. I hope the following books do shed some light both on Luce's and Daniel's story and on things concerning the fallen angels.

RECOMMENDATION: Although Torment was a bit disappointing for me, I still recommend it to those who loved Fallen and want to know more about what happens next.

Top Ten Tuesday is an original feature/weekly meme created hosted at The Broke and the Bookish.

In random order (linked to Goodreads or my review):

…and many more vivid settings/worlds are worth mentioning, the above are only the first to come to mind.

This is an occasional Sunday feature where my cat, pardon, Her Majesty the Cat, offers her more or less gracious insight into my (and her) life. 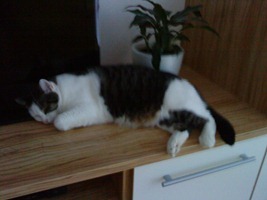 The sleep is good, the grass outside is green and tasty, and the birds are captivating.

Hope you're having a pleasant and relaxing summer!


Follow Friday is a weekly meme hosted by Parajunkee and Alison Can Read.

Today’s question is: “Christmas in July! Someone gives you a gift card for two books (whatever that costs). What two books will you buy?”

The most obvious choice would be completing my IAD series by Kresley Cole, so Pleasure of a Dark Prince and Demon from the Dark (books 9 and 10). On the other hand, I've got around 20 books on my wishlist, so it'd probably take me a week to decide which ones to buy. However, at the moment I'd go for Farewell, My Queen by Chantal Thomas and Archangel of Mercy by Christina Ashcroft.

Thanks for stopping by! Feel free to look around my blog, and if you like what you see, don't hesitate to follow me via GFC or Twitter (@StrangeNewWords), or subscribe to my posts via RSS or email. And, please, let me know if you decide for any of the above options, so I can return the favour.

SUMMARY (from Goodreads): When a down-on-her-luck divorcee meets a determined-to-dominate detective, they find out that falling in love can be murder...

Nell Dysart's in trouble. Weighed down by an inexplicable divorce and a loss of appetite for everything, Nell is sleepwalking through life until her best friend finagles a job for her with a shabby little detective agency that has lots of potential and a boss who looks easy to manage.

Gabe McKenna isn't doing too well, either. His detective agency is wasting time on a blackmail case, his partner has decided he hates watching cheating spouses for money, and his ex-wife has just dumped him...again. The only thing that's going his way is that his new secretary looks efficient, boring, and biddable.

But looks can be deceiving and soon Nell and Gabe are squaring off over embezzlement, business cards, vandalism, dog-napping, blackmail, Chinese food, unprofessional sex, and really ugly office furniture, all of which turn out to be the least of their problems. Because soon, somebody starts killing people. And shortly after that, they start falling in love...

This is actually a fun read. It has a bit of a snarky tone, and I laughed a lot during reading it. Additionally, some suspenseful elements kept my attention throughout the book.

Unfortunately, the writing is somewhat messy, so I had to pause occasionally and go back to figure out who was talking to whom and the like. There are also some things that do not add up, which furthermore contributes to the confusion.

The strongest point of the book is the portrayal the relationship between Nell and her friends. I liked it how they stick together through thick and thin, supporting each other and having fun together.

Overall, Fast Women is a quick and easy, but captivating, book. A somewhat confusing writing, which disturbs the smoothness of the reading process, is the reason for me rating it three instead of four stars.

RECOMMENDATION: Fast Women is a light and funny contemporary romance with a dash of suspense.

Teaser Tuesdays is a weekly bookish meme, hosted by MizB of Should Be Reading. Anyone can play along! Just do the following:

"This was all so strange and uncanny that a dreadful fear came upon me, and I was afraid to speak or move. The time seemed interminable as we swept on our way, now in almost complete darkness, for the rolling clouds obscured the moon." 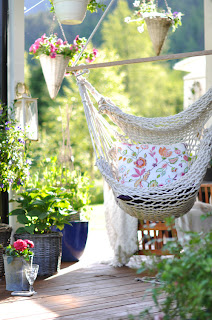 Commentary: A very pleasant spot for summer, like a oasis from the sun and the hit. The colours are very lively, I love lots of plants around.

The Collector by John Fowles

SUMMARY (from Goodreads):  Withdrawn, uneducated and unloved, Frederick collects butterflies and takes photographs. A lottery win enables him to capture art student Miranda and keep her in the cellar of the Sussex house he has bought with the windfall.

I was surprised by how captivating and fast read The Collector is. I always expect a classic to be somewhat tedious, but this novel is so intriguing I could not put it down because I had to know what happened.

Fowles tells the story from both sides, Frederick's and Miranda's. The first part of the story is told from Frederick's P.O.V. and it made me sympathise with him despite his wrongful actions, because his reasoning is sensible and, in a way, innocent.

The events are then retold by Miranda and are, in spite of repetition, fresh, because her experience is new to the reader. Miranda thinks very highly of herself and feels only contempt towards Frederick. She thinks she is better than other people – especially working-class, uneducated people such as Frederick – because she is an artist. She feels superior to them due to her way of thinking. These traits made me dislike her. On the other hand, her fear, feeling of suffocation, longing for freedom, and inability to understand Frederick are perfectly understandable, and I did feel sorry for her and I hoped she would be fine in the end.

The last part of the novel is again told by Frederick, who finally turns out to be a monster. However, the reasons for him becoming a psychopath he is are clear. I could not help but wonder if his life would have taken a different path had people around him, Miranda especially, acted differently and understood him. So, I felt sorry for him, in spite of everything.

All in all, The Collector is an insightful take on human psychology. It is suspenseful and tragic and makes the reader think about social and philosophical issues.

RECOMMENDATION: The Collector is a gripping, thought-provoking novel for everyone who wants to take a look into the psychology of both the captor and the captive. 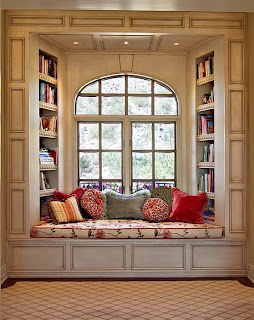 Commentary: A lot of comfortable, cheery pillows, plenty of books at hand, and natural light. What's there not to like about this spot?