SUMMARY (from Goodreads): When William X dies, the duchy of Aquitaine is left to his fifteen year-old daughter, Eleanor. But such a position for an unmarried woman puts the whole kingdom at risk. So on his deathbed William made a will that would ensure his daughter's protection: he promised her hand in marriage to the future King of France.

Eleanor grows into a romantic and beautiful queen, but she has inherited the will of a king, determined to rule Aquitaine using her husband's power as King of France. Her resolve knows no limit and, in the years to follow, she is to become one of history's most scandalous queens.

It has been well over a decade since I read anything by Victoria Holt/Jean Plaidy, so maybe my memory is failing me or I have become a more demanding reader, or this just isn’t one of her best works.

Or maybe Slovene translations (I used to read her works in Slovene, back then, and this is the first book of hers I read in English) are just better than the originals because I was somewhat unpleasantly surprised by the quality of writing in The Plantagenet Prelude. It is a well enough written book, but my expectations were higher. There is a lot of telling instead of showing and  misplaced punctuation (commas). However, to be fair, the writing improves the further into the book one gets (or maybe I just got used to it.)

The story is historically accurate, as per Plaidy's reputation, but I had a few issues with it.

I love reading about strong female historical figures, and Eleonore of Aquitaine definitely is one. I admire her standing for the equality of men and women and I agree with her complaints about Henry’s and general view of women’s only job and worth being childbearing. Yet, I don't particularly like Eleonore: she is self-centered, whimsical, insensitive hedonist. She is, though, devoted to her children, and she is more that a match to Henry.

Another major issue for me was, albeit again historically accurate, the amount of cheating in the book. Everyone cheated on everyone, with the exception of Eleonore not cheating on Henry, because of what it would cost her – her status and her children, possibly even her life. I hate the double standards of it: for men, of course, had no such repercussions to fear and could cheat to their hearts content, because ‘that’s how men are’, despite promising fidelity before God.

Fortunately, or unfortunately, depends on how you look at it, this aspect of the book becomes less of an issue about one third in, when the plot focuses on Thomas Beckett and the relationship between him and King Henry. Until, naturally, the intrigues and envy of the court and clergy and Henry’s pride and the conflict between the State and the Church come between them and everything takes a turn for the worst.

Finally, The Plantagenet Prelude presents the beginning of the Plantagenet era in a simple, reader-friendly style, without sacrificing historical accuracy, as is Plaidy’s manner. Despite the unnerving things mentioned, I did like the book and I am looking forward to reading the rest of the saga.

RECOMMENDATION: If you like historical fiction and you are interested in the early Plantagenet era, The Plantagenet Prelude is worth trying. 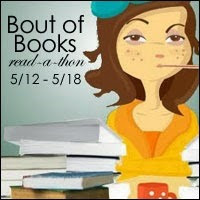 The Bout of Books read-a-thon is organized by Amanda @ On a Book Bender and Kelly @ Reading the Paranormal. It is a week long read-a-thon that begins 12:01am Monday, May 12th and runs through Sunday, May 18th in whatever time zone you are in. Bout of Books is low-pressure, and the only reading competition is between you and your usual number of books read in a week. There are challenges, giveaways, and a grand prize, but all of these are completely optional. For all Bout of Books 10 information and updates, be sure to visit the Bout of Books blog. - From the Bout of Books team

I was still trying to not over-stress myself since this was supposed to be fun, so my goals were once again minimalistic:

Done. Not sure how many pages I read, because I didn’t count, but I did read every day, even though on Sunday it was just fanfiction (and one which made me cry, BTW).

I did write and post a review of The Silmarillion, I didn’t write the other, old one, though, but its turn shall come.

I actually participated in two challenges.

On Friday, I did Rainbow of Books challenge, hosted by Neon Yeti Reads, which entailed making a mess of my bookshelves in search for the covers I needed and then putting everything back in order. ;)

My pile of books for Rainbow of Books challenge by @neonyetireads #boutofbooks pic.twitter.com/f5KtYBIsNY

And yesterday, on Sunday, I did the Retitle Your Current Read challenge, hosted by Oh Magic Hour.

I joined in Saturday’s twitter chat and had fun.

Well, this didn’t happen. I guess socialising on twitter was enough for me.

And done! I started The Plantagenet Prelude by Jean Plaidy and got about 50 pages in so far.

So, that’s it. Overall, this was both fun and successful.

And finally, I’ve taken an important life lesson from this event, for which I’m very grateful to Amanda, who banned FAILing and made us all FLAIL instead.

The pessimist I am, I needed that to be reminded to celebrate my achievements instead of complaining about things I didn’t do. Now I just have to keep that in mind, not just with regard to reading and blogging, but to all aspects of life.

How was your Bout of Books 10.0? Is there anything special you will remember it by?

SUMMARY (from Goodreads): The Silmarillion is a gloriously realised story of rebellion, exile, war and the heroism of elves and men. But to gain an insight into the staggering complexity of Tolkien's world, however, the shorter works also included are must-reads. Dealing with the myth of creation, the nature of the Gods, the fall of Númenor and the Rings of Power, they paint a vivid picture not only of Middle Earth but also of the author's soaring imagination.

Despite having read The Silmarillion a few times before in Slovene translation, I have never reviewed it. Therefore, I decided to do so now that I have finally read it in English.

The Silmarillion is often referred to as a prequel to The Lord of the Rings. However, those who expect a similar epic adventure story might be disappointed.

Edited by Christopher Tolkien and published posthumously, it contains Tolkien’s writing about the early ages of the Middle-Earth. Though it is not a thick volume (my edition has just over 360 pages, not counting the nomenclature appendix), its narrative, great and tragic, is full of names and genealogical ties, regional and ‘political’ – in a sense – divisions, which may seem boring, but to me it is fascinating.

The Silmarillion is basically a historical narrative, fictional non-fiction, a book a Gondorean of the Fourth Age would use to study the ancient history or a Tolkien fan to learn more about the numerous references made in The Lord of the Rings: from Morgoth, the first Great Enemy, and the fall of Gondolin to personages such as Lúthien and Finrod.

Finally, as the icing on the cake, this edition contains a part of Tolkien’s letter to his publisher, conveying not only Tolkien’s ideas of his own work and its development but also his general views on fiction and writing.

Thus, with everything mentioned, I can only say I absolutely love The Silmarillion, both for its fictional and meta-fictional value.

RECOMMENDATION: Essentially, The Silmarillion is a history book and a bible at once (after all, The Bible is also a history book in a way) and reads as such; it provides an explanation of the creation of Tolkien's world and an account of the history of the Elves and Men before the time of the Lord of The Rings, and is as such a must-read for a fan of Tolkien’s work.

The Bout of Books read-a-thon is organized by Amanda @ On a Book Bender and Kelly @ Reading the Paranormal. It is a week long read-a-thon that begins 12:01am Monday, May 12th and runs through Sunday, May 18th in whatever time zone you are in. Bout of Books is low-pressure, and the only reading competition is between you and your usual number of books read in a week. There are challenges, giveaways, and a grand prize, but all of these are completely optional. For all Bout of Books 10 information and updates, be sure to visit the Bout of Books blog. - From the Bout of Books team

I can’t believe the 10th Bout of Books readathon is almost here! It seems like it was yesterday when I accidentally stumbled upon the first one. And I’ve been participating ever since, though a few times were major reading fails.

Nevertheless, it’s always a fun way to boost your reading, help you meet new bloggers, do fun challenges and all in all have a good time, so join in!

Of course, I might have a bad week (wouldn’t be anything new), and fail miserably, but maybe not.

Are you in? What are your goals?

ETA: I’ll be mainly updating on Twitter (@StrangeNewWords), since that is less time-consuming than writing a blog post. Unless, of course, there is something I absolutely feel like I have to post. ;) And, of course, I will write a wrap-up post at the end.