This is an occasional Sunday feature where my cat, pardon, Her Majesty the Cat, offers her more or less gracious insight into my (and her) life.

Did you know that Jo loves nicknames? As in, she loves giving me nicknames, instead of addressing me properly.

Some aren’t that bad, however the others…

My favourite three are:

My least favourite ones:

Do you see the pattern here? I’m a big cunning majestic cat! Rawr! Not something little. (In Jo’s defence, all those terms are one-word diminutive endearments in Slovene.)

Oh, oh, and the insult of all insults: mousey. Mousey! *hisses* I won’t say anything else.

SUMMARY (from IMDB): After being deemed unfit for military service, Steve Rogers volunteers for a top secret research project that turns him into Captain America, a superhero dedicated to defending USA ideals.

Why on Earth have I not watched this before?

‘This’ as in not just this film but most of the Marvel things (apart from both Thors and The Avengers which I have watched.) I mean, I am fantasy/sci-fi kind of gal.

There are special effects and things blasting off. But there is also WWII. And good winning vs. evil. And a little guy becoming a hero, saving the world, and making the ultimate sacrifice.

There are thought-provoking issues, heartbreak, and a little romance, and it is beautiful and painful and amazing. And I’ve used way too many and-s in one post.

Overall, I loved watching the co-called making of Captain America, a growth of a hero. I say growth, because one doesn’t become a hero from nothing, not if they don’t already have something heroic in them already. And Captain America: The First Avenger presents that very well.

RECOMMENDATION: Captain America: The First Avenger is a wonderful mix of sci-fi with a historical background and the fight of the good against evil. Since probably everyone but me saw this long ago, I don’t think I have anything else to say to recommend it.

The Bout of Books read-a-thon is organized by Amanda @ On a Book Bender and Kelly @ Reading the Paranormal. It is a week long read-a-thon that begins 12:01am Monday, August 18th and runs through Sunday, August 24th in whatever time zone you are in. Bout of Books is low-pressure, and the only reading competition is between you and your usual number of books read in a week. There are challenges, giveaways, and a grand prize, but all of these are completely optional. For all Bout of Books 11 information and updates, be sure to visit the Bout of Books blog. - From the Bout of Books team

I was trying to not over-stress myself since this is supposed to be fun, so I didn’t set up any big goals. But something happened on Wednesday and I was super stressed out for the rest of the week. So I didn’t do much reading. I mean, I did, but I didn’t.

Let’s se how I did with my goals:

Well, I have read every day. However… considering things I’ve been dealing with in RL, I found Deathless too depressing (although so very beautiful, I’ll definitely continue reading it, just slowly) and none of the other books seemed enticing enough, so I read copious amounts of fanfiction instead, because that helped me relax.

I participated in the Book Scavenger Hunt, hosted by The Book Monsters.

I joined the Monday twitter chat. It was great.

*blushes* Nope. Socializing was not my thing last week.

“Anything of the above will be a success.”

Well, I did (sort of) accomplish more than half of my goals, so it’s a success, right?

How was your Bout of Books 11.0? Is there anything special you will remember it by?

It’s the first day of Bout of Books 11.0 and The Book Monsters is hosting Book Scavenger Hunt.

1. A Book that begins with “B”  (for Bout of Books!): Ballad by Maggie Stiefvater

2. A book that has been made into a movie/tv show: Charlotte Gray by Sebastian Faulks, but I liked the film better. (What? I know!)

3. A series you love: Immortals After Dark by Kresley Cole 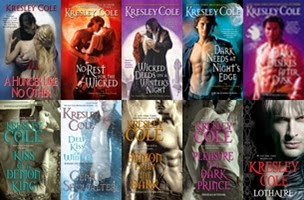 And, that’s it. All god things are three, so let’s stop there.

The Heart of the Lion (Plantagenet Saga #3) by Jean Plaidy

SUMMARY (from Goodreads): At the age of thirty-two, Richard the Lionheart has finally succeeded Henry II to the English throne. And, against his father's wishes, he intends to make Berengaria, daughter of the King of Navarre, his Queen. But first he must fulfil his vow to his country to win back Jerusalem for the Christian world. Leaving England to begin his crusade, Richard's kingdom is left in the hands of his brother, John, who casts covetous eyes on the crown, and his sister, Joanna, who is willing to defy even a king.

Richard the Lionhearted is often romanticised in fiction. However, Plaidy portrays him in a much more realistic way, with his good and bad qualities. The latter are above all his naivety and the notorious Plantagenet temper and are to blame for some of his mistakes that ultimately lead to his downfall.

Richard begins his reign by setting off on a crusade, the hardships and trials of which Plaidy leaves to a great extent unembellished. For his good looks, charm, bravery, justice and integrity he is loved by everyone – that is, everyone except Leopold of Austria.

Yet, what permeates his entire story is a great friendship (or, dare I say, epic love) between him and Philip the II of France, always mixed with hatred between the two rival kings.

Plaidy presents all points of views, even those of yet again pushed aside women: most importantly, Richard’s wife and Queen Berengaria and his sister Joanna.

The book, of course, ends in tragedy and death (which I don’t believe is a spoiler), not just for Richard, but for England, left at the mercy of his brother John, as Richard’s preoccupation with wars and male friendships and his neglect of poor Berengaria has left him heirless.

Thus, what I have to look forward in Book 4 is the rein of violence and oppression of the erratic, self-serving, profligate king John.

RECOMMENDATION: The Heart of the Lion is a well fictionalised tale of one of the most renown kings in the English history, Richard the I.

The Bout of Books read-a-thon is organized by Amanda @ On a Book Bender and Kelly @ Reading the Paranormal. It is a week long read-a-thon that begins 12:01am Monday, August 18th and runs through Sunday, August 24th in whatever time zone you are in. Bout of Books is low-pressure, and the only reading competition is between you and your usual number of books read in a week. There are challenges, giveaways, and a grand prize, but all of these are completely optional. For all Bout of Books 11 information and updates, be sure to visit the Bout of Books blog. - From the Bout of Books team

Anything of this will be a success.

Books to select from:

I’ll be updating on Twitter (@StrangeNewWords), since that is less time-consuming and I’ll write a wrap-up posts in the end.

Are you in? What are your goals?