Virtual Advent Tour is hosted by Sprite Writes. Drop by her blog to see other stops on the tour with many interesting titbits about advent traditions. 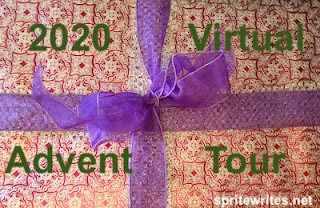 Music is an essential part of many if not most celebrations and that particularly holds true for Christmas time.

In 2016, I shared my favourite English holiday songs.

This year, however, as the only non-native English speaking country participant, I want to provide some 'exoticism' 😉 and share with you what we call folk church songs, that is, songs for church/Christian holidays (in this case, Christmas) that are widely known and sung among people.

We have a long, centuries-old tradition of folk church songs, many originating from unknown authors and spreading among the people, others being written for choir but becoming widely popular among everyone, and some imported and translated from other languages and being loved so much they are now considered our own.

I will start with one of the latter, perhaps the most popular and most frequently translated Christmas song of all times across the world, Sveta noč, or, as you may have already guessed, Silent Night.

Poslušajte, vsi ljudje (Listen, all people) is a personal favourite because it mentions St. Joseph; it talks about how Mary and Joseph travelled to Bethlehem where after looking for a place to stay they finally found it outside the town in a barn where Jesus was born.

As I said, these are all very popular and sung by everyone en masse at church, but of course the above examples are choir and bands recordings, because unsynchronised people's singing would have been unintelligible. Then again, all of these are probably unintelligible to you, but I hope you at least enjoyed the catchy melodies. The music of the last one is played on European zither, which has an especially apt sound for Christmas songs.
I will end with another version of Silent Night in honour of my uncle, because I learned halfway through writing this post (on Friday, and TBH continuing writing it in the breaks between crying kept me sane) that he had died. Lojze Slak, also deceased, is one of our most renowned musicians and my parents' favourite, he was from one of the neighbouring villages to that of my father and uncle's home village and my father – and, I think, also my uncle – knew him personally, so this is for him. At least they are all together now, I believe.
I apologise for ending on a morose note. I wish you all happy holidays, even if you don't get to spend them with your loved ones due to Covid-19, I hope you are able to spend them at least with the knowledge that they are alive and well and that all of you stay that way!
Posted by Jo Kay at 02:00