Love and Intrigue by Friedrich Schiller 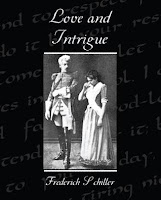 Love and Intrigue is a play from the German Classicism era, although its tone is more that of Romanticism. Ferdinand von Walter, a premier’s son, and Louisa, a music teacher’s daughter, fall in love; their love, however, stands little to no chance against their vastly different social statuses and political intrigues.

Therefore, Love and Intrigue is a tragedy, something akin Cinderella meets Romeo and Juliet. The young sweethearts are sacrificed at the expense of the premier’s past sins and their cover-ups which demand ever more convoluted intrigues for him and his accomplices to retain their positions, their hopes resting on Ferdinand doing his father’s bidding.

Thus, upon Ferdinand’s refusal to comply due to his affection for Louisa, a plan is set in motion to break them apart. Alas, the way Ferdinand handles the knot of intrigues he finds himself in left me with mixed feelings about him, mostly because of his blindness to the possibility of the said intrigue.

Unlike Ferdinand, the sixteen-year-old, innocent Louisa, is anything but ignorant and blind, and I loved her for how astutely she sees through people and their intentions and how she strives to do right by people she deems she must do right by, which is – as it was meant to – her very downfall.

Of the other characters, Lady Milford was intriguing and rather likeable, while the play also employed your typical assortment of villains and more or less stock supporting characters.

All in all, Love and Intrigue is a good enough read for a work that really should be seen in a theatre, and its themes give food for thought at the present time just as they did when it was written.