Grace and Truth by Jennifer Johnston 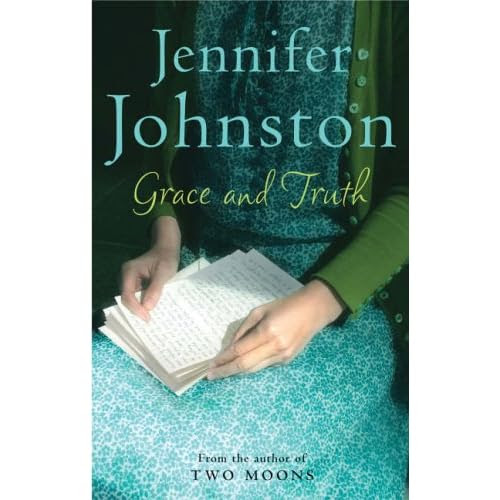 SUMMARY (by goodreads): Sally, an actress, has just returned from a long European tour to her house in Goatstown, and looks forward eagerly to seeing her husband, Charlie, again. When Charlie announces that he's leaving her, Sally, devastated and furious, makes him pack his bags at once. But maybe, she wonders later, she really is too hard to live with? Weighed down by the unspoken secrets of two generations, and hoping for some glimmer of comfort, Sally turns to her grandfather, the frosty old Bishop she has never really known.

Sally is a neurotic actress, who is despite her professional success an unhappy person. She is eternally restless and at the same time “whacked” because she feels as if she was only half of a human due to her unknown father. She doesn’t understand the motives for her mother’s silence about her father and her depression which led to her suicide. Sally is deeply burdened by the secrets she doesn’t know, by having practically no family and by uneasy relationship to her only relative, an old Bishop, her grandfather.

Nevertheless, Sally is, just as her mother in the past, unable to do anything about her feelings of alienation and unhappiness until her husband Charlie announces he is leaving her. This is a trigger which sets Sally on her way to a new life. She decides to visit her grandfather who spends his days writing memoirs about his honourable work. There relationship is loose and distant but, as their encounters become more frequent over a short period of a few weeks, it seems that they will overcome their awkward, reserved attitude towards each other.
Sally is surprised by finding out her grandfather closely follows her career and has seen many of her roles on stage. She discovers that he, too, had an aspiration to become an actor, but was not allowed to follow his dreams. A bond finally forms between them. Then he hands her a booklet of memoirs he was prompted to write by her renewed visits. These are only for her to read.
The Bishop’s memoires finally reveal the deepest family secrets Sally has always wanted to know. Now, she wishes she had never read the booklet. But only for a while. Because the truth brings her grace at last to find strength in herself. The truth enables Sally to forgive her mother for her silence. The truth makes it possible for Sally, just as well as for the reader, to see that the Bishop’s high and honourable attitude and all his work were just a cover-up for his many sins and unhappy soul. Therefore, upon Sally’s last visit to the dying Bishop she can part from him with forgiveness.
’s novel portrays the danger of overprotective and possessive parents who leave their children in ignorance. SPOILER: If the Bishop’s wife was more educated about the nature of marriage, she wouldn’t have been frigid and wouldn't have rejected her husband. If she hadn’t almost completely excluded the Bishop from their daughter Ruth’s life, he would have been able to be a father to her and I think it would have been much less likely for him to indulge into an incestuous relationship with Ruth. END OF SPOILER
In Grace and Truth the overprotective and controlling parents cause their children’s misery. Ignorance just adds to that misery. If Sally’s mother was strong enough to reveal the truth at least to Sally, Sally’s if no one else’s life would be a whole lot different and, I dare say, happier.
RECOMMENDATION: If you don’t mind drawing conclusions and searching for the meaning underneath what is written by yourself, this is the book for you.